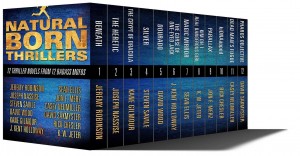 I had the honor of being included in a bundle deal, Natural Born Thrillers, with some excellent authors. I really feel like the little kid at the adults’ table here, but go pick up this deal for the so-low-you-stole-it price of $0.99 on Amazon!

Books in the bundle: